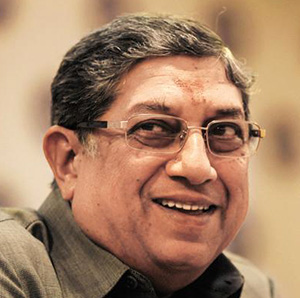 The India Cements Ltd is one of the oldest family owned and professionally managed business houses ably supported by a team of professional managers, technocrats and a dedicated workforce. The company is headed by Mr N Srinivasan, Vice Chairman and Managing Director, who has ably steered the company through mergers and acquisitions, green field and brown field expansions.

Mr N Srinivasan has more than five decades of experience in the industry. He did his B.Sc. (Tech) from Madras University and Post Graduation in Chemical Engineering from Illinois Institute of Technology, USA. Under his dynamic leadership, The India Cements Ltd has emerged as the largest cement company in the South. It has seen a big jump in turnover from Rs. 1033 crores in 2002-03 to Rs. 5658 crores in 2018-19.

Over the last two decades, the spectacular growth and development of the company can be directly traced to Mr Srinivasan’s dynamic leadership, intuitive knowledge of the market and vision.

He was the Sheriff of Madras for two terms. He was the President of the Cement Manufacturers’ Association (CMA) for five terms (1991-94) & 2004-06). He was the Chairman of the Development Council for cement industry constituted by the Government of India for two terms (1992-96).

Mr Srinivasan, keeping the rich sporting tradition of India Cements in mind, has been supporting various sports bodies and associations providing all kinds of assistance and infrastructure support.

He was the President of the Asian Cricket Council. He was a Director on the Executive Board of the International Cricket Council (ICC) and a member of the Finance and Commercial Affairs Committee and HR & Remuneration Committee of ICC.

Mr Srinivasan, was unanimously elected as the first Chairman (2014-2016) of the revamped International Cricket Council (ICC) in February 2014.

He was formally appointed as Chairman of ICC at the conclusion of the world body's annual conference in Melbourne on June 26, 2014.

He is also the Chairman of M.M. Forgings Ltd.

During 2009, a Lifetime Achievement Award was conferred on Mr Srinivasan by TIECON. During 2011, a Degree of Doctor of Literature (Honoris Causa) was conferred on him by the Tamil Nadu Physical Education & Sports University, Chennai.

In December 2019, Alagappa College of Technology, Anna University Chennai, presented him Distinguished Alumni Award in recognition of his contribution to cement industry and for supporting schools, colleges, polytechnics, sports facilities and building shelters for elders